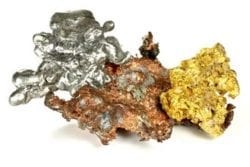 An uptrend that lasted most of May pushed gold above US$1,900 per ounce to end the month. However, June headwinds worked against the yellow metal late in the session sending prices lower.

Positive growth in the US dollar paired with promising economic data has dampened gold’s ascent above US$1,900.

As the US economy reports less than 400,000 applications for unemployment last week, analysts think the Federal Reserve may introduce more stringent monetary policy in the weeks ahead.

While gold may face headwinds ahead, Gwen Preston of Resource Maven thinks there is plenty of potential in the mining sector.

Watch Preston discuss the factors that will benefit gold above.

Silver traded flatly for the last session of May. Monday saw the white metal priced at US$27.77 per ounce, a brief bump sent prices to US$28.44 a day later.

Pressures weighing on gold prevented silver from retaining its US$28 level. By Friday (June 4) silver was back in the US$27 range.

Platinum values shed 2.4 percent throughout the week sending the metal to a 60 day low.

Despite the weak performance to end May, platinum’s future looks promising as it is closely tied to the push for clean energy.

“Platinum’s green credentials are pretty good for the fact that it does improve emissions out of vehicles. It can help decarbonize through the hydrogen economy, and it also purifies water,” Trevor Raymond with the World Platinum Investment Council told INN.

“It does a whole lot of good stuff in chemicals; it reduces the amount of electricity and increases the yield in lots of chemical processes.”

After breaching an all-time high in early May, palladium has shed some if its gains. Still holding above US$2,700 per ounce supply issues continue to support higher price thresholds for the catalyst metal.

The base metals experienced a consolidation mid-week as prices slipped lower.

“We thought the metals were looking a bit top heavy on Thursday so the pullbacks were not so surprising, neither is the dip-buying because generally underlying sentiment has proved to be very strong in recent months,” states a Friday Fastmarkets note.

“But we will now need to wait to see what the US employment report holds and how the market reacts to that. The metals are vulnerable to profit-taking should broader markets get nervous about central bank tightening.”

“In particular, China may see an increase of 6 percent year-on-year in refined copper production, with Q1 production up 19.5 percent,” reads a Roskill report. “Demand will continue to be driven by an increase in power utility spending, the property sector and consumer goods.”

Friday morning saw copper holding in the US$9,967.

Zinc moved above the US$3,000 per tonne level to start June, however headwinds sent values lower by Thursday.

The growth post 2020 has been attributed to positivity in Chinese and battery sector demand, according to a Roskill nickel overview.

“Despite the volatility characteristic of the nickel price, such an increase was counterintuitive given that the market remained in surplus throughout the majority of 2020,” it states. “Market speculation, driven by concerns in some quarters of an impending shortage of nickel suitable for use in batteries, helped to fuel the bull narrative.

Rounding out the base metals was lead which traded sideways for the first week of June. Starting the transition period at US$2,208 per tonne, a brief spike sent prices to US$2,228.50 mid-week. Although to the end the price had slid back below US$2,200.