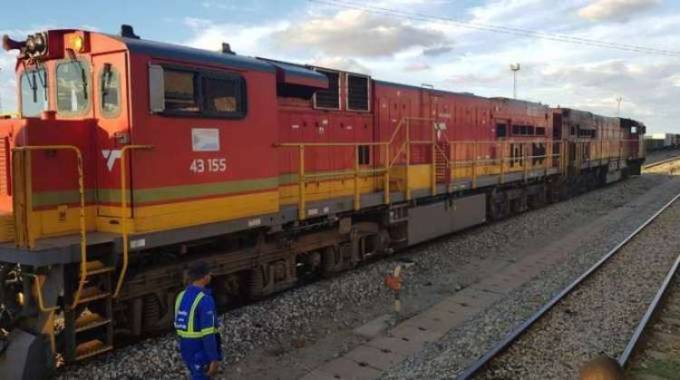 One of the locomotives that were delivered to the National Railways of Zimbabwe in February this year. — (Picture by Thupeyo Muleya)

Africa Moyo Business Reporter
The National Railways of Zimbabwe (NRZ) is set to thrash out a viable coal transportation rate for Liberation Mining, a Hwange-based coal miner that is targeting the export market after the firm protested the charges that it claimed were exorbitant.

Liberation Mining had raised concern that the 5c per tonne, per kilometre tariff being charged by NRZ to move coal to the export markets was unsustainable. The firm’s director technical services, Engineer Peter Mutsinya, recently said they have engaged South Africa’s Transnet with a view to getting a “viable” tariff, and have been promised to offer a 3c tariff.

Once Liberation Mining engages Transnet, it means the envisaged revival of NRZ would have been dented given that moving cargo is its primary business, contributing 97 percent to revenue generation. However, Diaspora Infrastructure Development Group (DIDG) executive director Mr Donovan Chimhandamba, told The Herald Business that they are now “finalising” a tariff for Liberation Mining.

“We are busy finalising a rate for them (Liberation Mining). Two weeks ago, we were with NRZ, Transnet and CFM (Portos e Caminhos de Ferro de Mozambique), mapping out a total solution for them,” said Mr Chimhandamba.

CMF is a parastatal that oversees Mozambique’s railway system and its connected ports.

Mr Chimhandamba’s DIDG is the one that teamed up with Transnet of South Africa and won the tender to invest $400 million into the resuscitation of NRZ.

Liberation Mining wants a fairly lower tariff because it has set up an ambitious production plan that will see it producing 1,5 million tonnes — run-of-mine — by end of this year; 7 million tonnes in 2020 and 15 million in 2022.

Naturally, the output cannot be consumed by the market in full, implying that the bulk would be exported mainly to South Africa, where producers are also angling for export markets. But the cost of transportation is threatening to spoil the party for Liberation Mining, a firm set up by locals who eventually got into a joint venture arrangement with VostokCoal of Russia.

Said Eng Mutsinya recently: “If I am talking about tonnages, we want to produce and generate foreign currency for the country, it is difficult to do so at the current costs. Unless we do something about NRZ as a nation, or as parliament, this nation is not going to benefit from coal. An incisive decision has to be made.”

Already, Liberation Mining has invested $22 million into the project since 2010, with $12 million going into exploration and operations gobbling $10 million. It expects to invest a further $39 million by year end. Overall, Liberation Mining’s coal project will require $500 million. Exploration has been done on 11 000 hectares out of the 16 545 hectare resource. Its resource statement gives them 1,2 billion tonnes of coal.

The company started mining development in September last year after getting a licence from the Environmental Management Authority (EMA).

Trial processing has been done and a plant that processes 100 000 tonnes per hour has been set up. Apart from exporting, Liberation Mining will sell some of its coal to industry, tobacco farmers, the Zimbabwe Power Company and Zisco once it starts operating, among other firms.