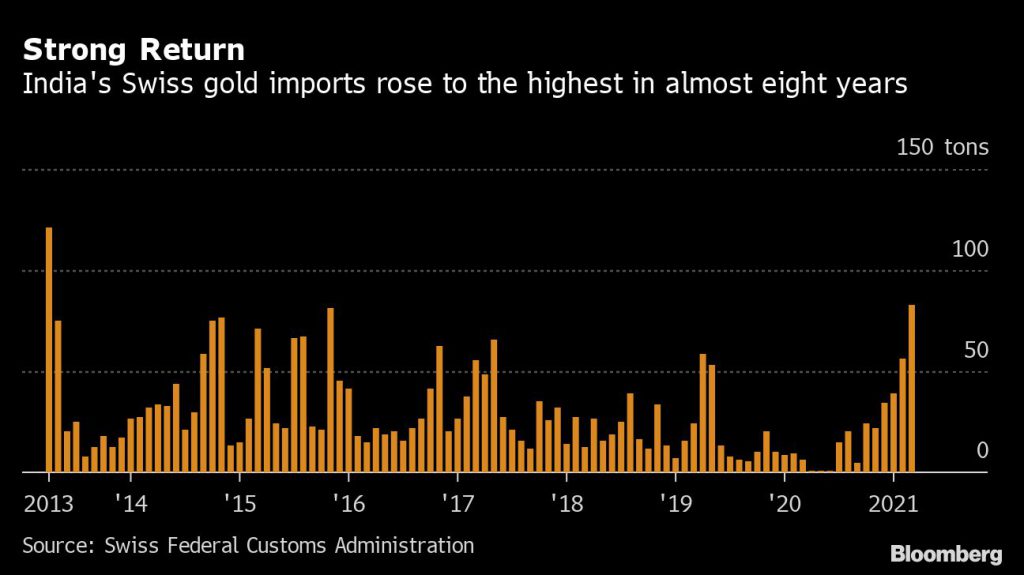 Gold prices fell the most in more than a week as better-than-expected US jobs data released on Thursday reduced the precious metal’s demand as a safe haven.

Spot gold declined 0.7% to 1,781.69 per ounce by 1:15 p.m. ET, after rising to almost $1,800 per ounce during the previous session. US gold futures were down 0.6% to $1,782.80 per ounce.
Meanwhile, new data from the US Labor Department showed that applications for state unemployment insurance unexpectedly plunged to a fresh pandemic low as the recovery gathers steam. Initial claims decreased by 39,000 to 547,000 in the week ended April 17, compared with Bloomberg’s forecast of 610,000 claims.

After a record-breaking rally last year, bullion has lost momentum amid the advancing dollar and rising bond yields. Investors remain focused on the economic outlook, with rising bond yields weakening the demand for non-interest bearing bullion.

Still, renewed buying from India and China after a year on the sidelines could provide support for the precious metal going forward. In March, India’s gold imports from Switzerland surged to highest in almost eight years as jewelry buyers took advantage of a dip in prices during the ongoing wedding season.

China also boosted shipments from Europe’s premier gold-refining hub. Imports from Switzerland rose nearly four fold to a seven-month high following the resumption of purchases in February. China’s central bank is also approving imports of about 75 tonnes a month to meet domestic consumption, according to Bloomberg.