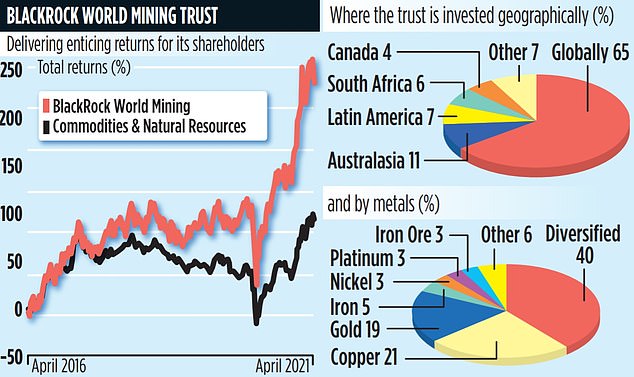 Investment trust BlackRock World Mining is a commodities fund with a twist that currently appeals to many income investors.

The £1billion stock market listed fund not only performs well when commodity prices are booming, but through adept management it also delivers an attractive quarterly income – presently equivalent to 3.6 per cent a year.

It’s an enticing mix that has attracted a small army of investors to the trust’s shares – and they have not been disappointed. Over the past year, it has delivered an outstanding overall return of 122 per cent, yet manager Evy Hambro is confident there is more to come.

‘We are in a good place right now,’ he says. He believes there could well be a ‘few more years of positive total returns’ ahead before commodity prices turn south again.

Hambro’s view is that demand for many commodities – the likes of lithium, iron, copper and nickel – will soar on the back of a recovering world economy with one eye very much on green issues.

With the supply of many of these metals limited and a chronic underinvestment in new mines, Hambro says commodity prices are likely to remain high, resulting in bigger profits for mining companies.

Some of these profits will feed through to investors such as World Mining by way of dividends which in turn will be passed on to the trust’s shareholders.

‘It’s a simple but compelling investment story,’ he says, ‘although it will be volatile along the way.’

Despite the three-figure returns made by the trust in the past 12 months, Hambro says the companies he invests in – mining giants such as Vale, BHP, Anglo American and Rio Tinto – are not overpriced. ‘The sector is trading at low valuation levels,’ he says. ‘It seems like a sweet spot.’

So sweet, in fact, that the trust has £150million of borrowings at an annual cost of just over one per cent – money that it is employing to increase its equity exposure.

The trust’s income comes from four main sources – company dividends, income from bonds issued by mining companies, trading of options and royalties (a share of the revenue from specific mines run by the likes of Brazilian mining group Vale and Australian-based OZ Minerals).

Last year, the fund paid out slightly less income (20.3p a share) than in 2019 (22p), a result of a reduction in one-off special dividends paid by mining companies as they adopted a cautious approach in the wake of the pandemic. But the income prospects for this year look promising.

Already in 2021, Rio Tinto, a top five holding, has declared the payment of a special dividend, taking its total dividend payments for 2020 to a level more than 21 per cent higher than in 2019.

Unlike most other income-friendly investment trusts, World Mining prefers to pay out most of the income it receives from its investments, rather than put some aside in reserves for when times are tough. Hambro says feedback from shareholders indicates that they prefer this approach – even if it results in a more volatile dividend.

The trust’s ongoing charge is just over one per cent and the stock market identification code is 0577485.

A recent note from investment trust analysts at Numis described the fund as ‘a good way to gain diversified exposure to the mining sector, which can be highly volatile on a stocks-pecific basis’.