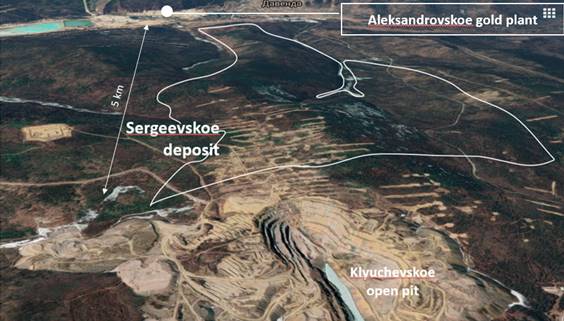 Orsu Metals Corporation signed a bulk test and pilot mining agreement to process the Sergeevskoe gold-mineralized material at the Alexandrovskoye mine and gold plant. The Alexandrovskoye mine and gold-processing plant are owned by Zapadnaya Gold Mining Limited, operating three gold mines in the Russian Federation with total annual production of 106.5 thousand ounces per annum. The Alexandrovskoye gold-processing plant is located immediately to the west from the Sergeevskoe license border. The terms of the agreement envisage that the parties will process the first trial batch of gold-mineralized material and will then finalize the commercial aspects of pilot mining and processing activities.

The Company did not complete pre-feasibility or feasibility studies to international standards. However, Orsu completed a Russian technical study that received an approval from the Russian mining authorities for extraction of 1,050,000 tons of mineralized material during three years from the North and South open pits to a depth of 30 to 35 m

As part of preparation for a bulk test and subsequent pilot mining, the Company and Alexandrovskoe mine
Cleared the vegetation over an area of 15 hectares, covering the two planned open pits and related infrastructure
Bbuilt haul roads connecting the sites of the planned pilot open pits with the waste dump and mineralized stockpile sites
Carefully removed and stockpiled the top soil
Received or in the process of receiving final ancillary permits such as safety certification, a blasting permit and an approval of mining plan with expectation that all required ancillary permits will be received shortly
Received a permit from State Fund of Precious Metals and Precious Stones of the Russian Federation (

Orsu Metals expects that pilot mining will begin in late July to August 2020.