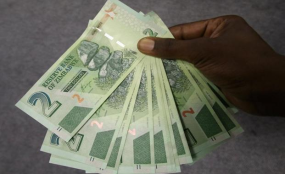 Finance minister Patrick Chinamasa has rubbished media reports that government is phasing out bond notes with a view to re-introducing a local currency.

Chinamasa said the environment is not conducive for such a move warranting the continued use of the multi-currency system and bond notes.

“As has been repeatedly advised by government, the economic fundamentals are not yet appropriate or ideal for the transition from the use of the multiple currency system that is supported by the surrogate currency in the form of bond notes,” said Chinamasa in a statement this Tuesday.

He added, “The government is quite aware that the most important economic fundamentals that the country would need to achieve before de-dollarisation begins are foreign exchange reserve sufficient to cover at least three months of imports, sustainable economic growth path and reducing fiscal deficit to sustainable levels.”

The minister is hopeful that there will be enough improvements in the foreseeable future to back the introduction the Zimbabwean dollar.

The budget deficit is projected to widen to $1, 8 billion this year from last year’s $1, 4 billion as excessive government expenditure outweighs revenue generated.

The bulk of expenditure is being gobbled by salaries for the civil service leaving little room for government to bankroll capital projects.

Revision of the indigenisation law through public policy pronouncements, the political changes which ushered in the Mnangagwa government and hints at restructuring of the civil service are among issues highlighted as potential investor pullers if implemented.

However, the implementation of these pronouncements, according to analysts, is most likely to be derailed by elections scheduled for later this year as the ruling party is historically known for populist policies.