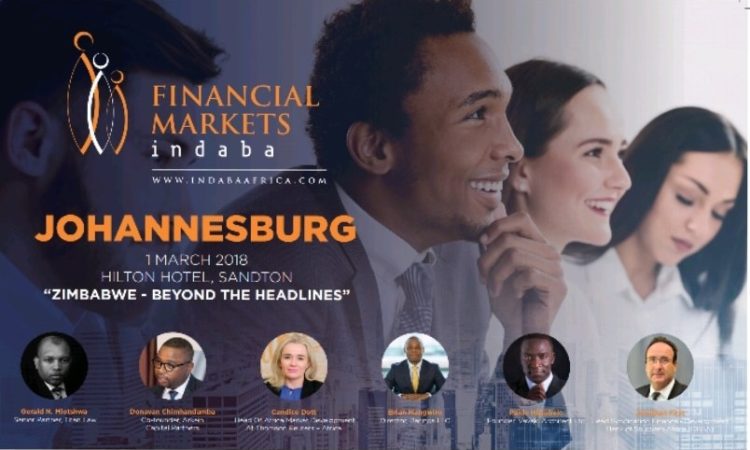 Financial Markets Indaba in partnership with Thompson Reuters is set to host the 5th edition of its series of business dialogues focused on creating conversations around financial markets and the emergence of financial markets under Zimbabwe’s new political dispensation.

The 5th edition which will run under the theme: Zimbabwe – Beyond the Headlines?  will be held at Sandton Hilton Hotel on the 1st of March 2018 in Johannesburg.

The Johannesburg Summit is part of a series of investment conferences in  three of Zimbabwe’s most important world cities which include Harare, Johannesburg and London.

In addition to traditional panel discussions on core economic themes, the Johannesburg Summit is hosting exclusive round-tables where developers and credible capital seekers will have direct engagement with selected potential investors and technical partners with an interest for Zimbabwe.

Over the past four conferences, the Financial Markets Indaba platform has hosted 127 speakers.

The FMI conferences are created to foster economic activity in the form of partnerships, deal origination and business development for capital providers and operators including their intermediaries.

By curating relevant panels, conversations and round-tables, the FMI is able to draw key decisions at speaker and attendee levels with a goal to help them do business.

With the new dispensation in place, there is a sense of a positive approach by different financial bodies.

Confidence has also been enhanced by reducing the cost of doing business in Zimbabwe, freely providing investment information to Diaspora and reducing red tape.

Government has also through the Office of the President and Cabinet (OPC) spearheaded a raft of reforms under the Rapid Results Initiative (RRI) to improve the ease of doing business, attract investment and ultimately grow the economy.

The Financial Markets Indaba conferences have over the years complemented the Zimbabwe Governments efforts to attract meaningful investment into the country.

Roundtables discussions which are limited to 20 people per session will be on Renewable Energy infrastructure including solar, hydro and bio-fuels