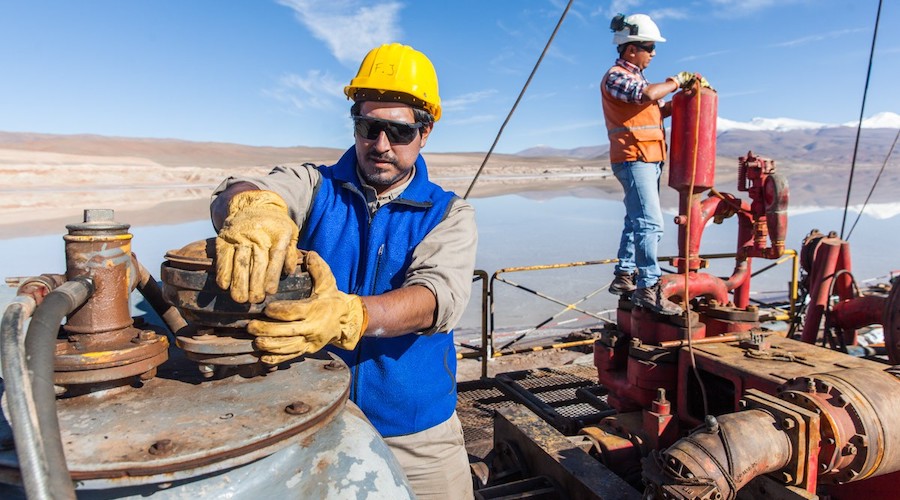 Millennial Lithium (TSXV: ML) announced that it was able to produce lithium carbonate of battery-grade purity from the first batch of brine processed through the company’s pilot plant at its Pastos Grandes project in Argentina.

According to the Canadian company, the brine feedstock was derived from the production well PGMW17-04 on the Pastos Grandes Salar which was pumped to ponds that concentrate the lithium carbonate by solar evaporation.
In detail, the pilot plant initially produces a first stage lithium carbonate, and the technical grade is basic battery-grade which can be further purified by recrystallization using the addition of CO2 to make a lithium bicarbonate solution. This solution is filtered to remove final impurities, heated, the CO2 recovered and lithium carbonate recrystallize as consistent battery-quality lithium carbonate.
With this first batch, Millennial said it was able to achieve battery-grade quality lithium carbonate at the completion of the basic stage and a premium quality battery-grade at the completion of the purification process.
Even though the field team conducted analytical work first at the project development park laboratory, check analyses were later performed by Kemetco Research, which also conducted physical testing, including particle size determination and a scanning electron microscope study for crystal habit determination.
“The analytical results from this first batch indicate battery-grade lithium carbonate can be produced prior to the CO2 purification stage, and with CO2 purification, we have the potential to produce a superior premium BG lithium carbonate product which may command a price premium,” Farhad Abasov, Millennial Lithium’s president and CEO, said in the media brief. “We have also demonstrated that we have the option to produce a high-quality technical grade and battery-grade product at a lower cost than estimated in the company’s feasibility study using the basic processing.”
Located in the northwestern part of Argentina, Pastos Grandes covers over 12,619 hectares. To date, Millennial has invested over C$40 million in exploration and development work on the property, which includes 22 completed exploration/monitoring wells, four pumping test production wells, pilot ponds, the pilot plant as well as a year-round camp supported by a hybrid solar power system.