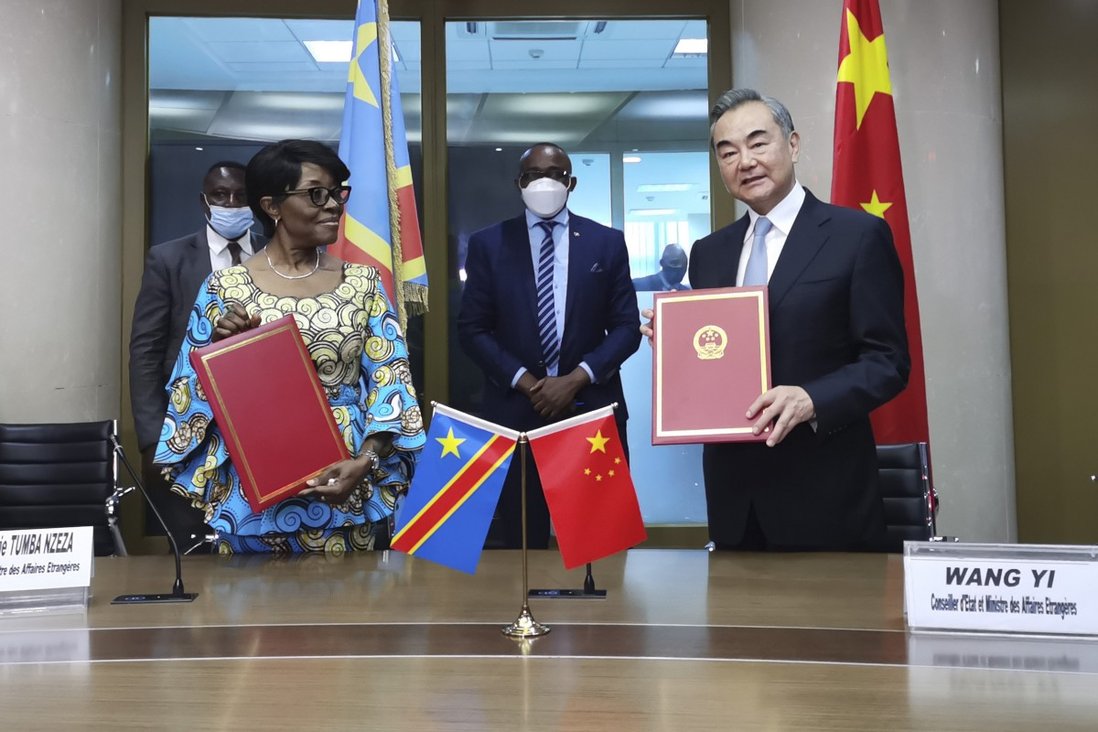 The visit by Chinese Foreign Minister Wang Yi to the Democratic Republic of Congo (DRC) earlier this year was indicative of a shift in Beijing’s lending and investment focus for Africa, according to analysts.

During his trip to Kinshasa in January, Wang promised that Beijing would write off loans to the Central African nation worth about US$28 million to help it deal with the impact of Covid-19 and provide US$17 million in other financial support.

He said also that China would fund infrastructure projects in the DRC, as it became the 45th country to sign up to the Belt and Road Initiative, Beijing’s grand plan to boost interconnectivity and trade around the world.

Over the past two decades, much of China’s lending in Africa has gone to Angola, which pioneered the concept of oil-backed loans to pay for roads, power dams and ports. According to the China Africa Research Initiative (CARI) at Johns Hopkins University, between 2000 and 2019, China extended US$42.6 billion worth of loans to Angola  – about 30 per cent of its total lending to African nations.

While China is still the world’s largest oil importer, the availability of crude from the Middle East – whose shipments would traditionally have gone to the US but no longer do because of sanctions – means it is no longer heavily reliant on African suppliers, analysts say.

But what Beijing does still need from Africa is copper, cobalt and other rare minerals, according to Mark Bohlund, a senior analyst at REDD Intelligence.

“This is one reason to expect China’s engagement in Africa to shift towards the Democratic Republic of Congo,” he said in a research report.

The DRC is the world’s largest producer of cobalt, which is an essential component of batteries for electric vehicles, as well as smartphones, tablets and laptops.

According to the CARI, while the DRC received only US$2.7 billion worth of Chinese loans between 2000 and 2019, the total value of Chinese foreign direct investments in the country was US$5.6 billion as of 2019.
“As a result of these transactions, a substantial part of the Congolese mining sector, which is mainly located in the east and southeast parts of the country, is now in Chinese hands,” the REDD report said.

Zhou Yuyuan, a fellow at the Centre for West Asia and African Studies at the Shanghai Institutes for International Studies, said that although Chinese firms had invested in African mines, including in the DRC, they were still minor players compared with the “mining giants of Western countries”.

China Molybdenum, which owned the world’s second-largest cobalt mine in the DRC, recently bought the as yet undeveloped Kisanfu resource from Freeport McMoRan for US$550 million, while other Chinese firms like Huayou Cobalt, Chengtun Mining, Wanbao and CNMC were also active there, he said.

Bohlund said the equity investments in the DRC were a way to secure copper supplies, adding that although Chinese lending to the DRC had been rising, most of the loans had been used to fund road and hydropower projects.

“This lending is likely to continue but won’t accelerate markedly as the Chinese are well aware of the challenges of operating in the DRC,” he said. “They will be discerning when it comes to the commercial viability of investment projects.”